21 Trees & Shrubs with Red Berries Pictures & How to Identify them 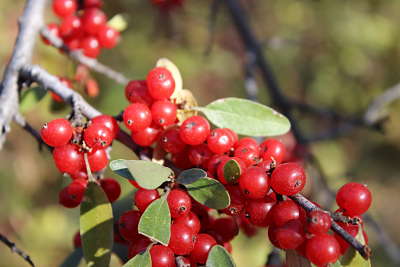 Trees & Shrubs with Red Berries Pictures & How to Identify them

The many types of trees and bushes that grow red berries include both edible and ornamental plant varieties. Many of the plants listed below produce both edible and non-edible fruits. For easy identification, you should learn the scientific names so you can narrow down the choices when choosing a tree or bush. Pictures of these types of shrubs growing in space will give you an idea of how they grow and look in their natural habitat.

You probably already know that berries make a great snack. But what you may not realize is that there are many different kinds of berries out there, only a few of which you’ll find at the supermarket or farmer’s market.

Bushes or Shrubs With Red Berries

It can be difficult to identify shrubs that are in your landscape and produce fruit with red berries. Before you start looking, consider a few things. Shrubs or trees with red berries may be ornamental and not edible or edible and ornamental. The type of red berry also often helps with identification such as red currants, hollies, Arkansas gooseberry, serviceberries, dogwood fruits, high bush cranberries, and wintergreen. These shrubs range from evergreens to deciduous and whether the leaves are glossy or jagged.

In many parts of the world, red berries are known to be edible. However, in some areas, this is not the case. The top source for identifying any red berry tree is the trunk of the tree. Redberry-type trees have reddish-colored bark and tree trunks that are usually round or oval in shape. These trees can tolerate a wide array of environmental conditions and often thrive in rocky or hilly regions.