How to Grow Plant & Harvest Blackberries Plants – A Comprehensive Guide 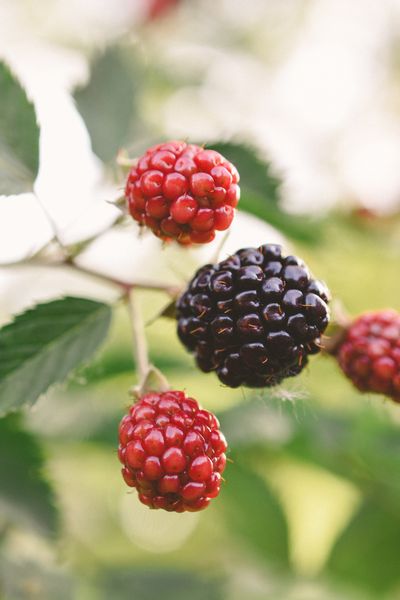 How to Plant Blackberries

Blackberries are a type of berry that is related to the rose. They can be planted in the ground or in a pot and should receive plenty of sunshine and rich loamy soil. The plants need to be spaced 5 to 6 feet apart and should not be harvested until the second year.

When planting blackberries, it is important to keep in mind that the plants need to be spaced 5-6 feet apart in order to allow for proper growth. In addition, the soil should be amended before planting with compost or other organic matter in order to create a rich, well-drained bed that is slightly acidic. Finally, trailing varieties of blackberry will need a trellis or some other form of support when planted. The best time to plant blackberries is early spring.

There are different types of blackberry plants, but they all have some commonalities. They are all perennial plants that will come back year after year. They also have thorns, so be careful when you are planting or handling them. Another thing to note is that blackberry plants should be transplanted in the winter time when they are dormant.

How much sunlight do blackberries need

Light is an important consideration when growing blackberries. Full sun is best, but some afternoon shade is tolerated in hot summer weather.Fthey but named varieties thrive in full sun. In these areas, light afternoon shade helps protect plants from excessive heat and prolongs the fruiting season.

Watering blackberry plants is important for their overall health and growth. It is best to water them during the day, as this will help prevent the growth of fungus and other diseases. You should also water them more frequently in the first few weeks after planting, as this will help them get established. After that, you can water them every 7-10 days, depending on the conditions. Remember that blackberries do not fare well in wet soils, so only water them when necessary.

Like most plants, blackberries require a specific temperature and humidity range in order to grow and produce fruit. In general, they need a period of cold dormancy followed by a warm growing season. The best environment for blackberries is in zones 5 to 8 where the temperatures are moderate and humidity levels are high. However, hot, dry winds can cause the fruits to be stunted or even killed.

Fertilizing your blackberries is an important step in ensuring healthy and productive plants. In the spring, you should apply a balanced fertilizer such as 10-10-10 nitrogen fertilizer. When spreading fertilizer, be sure to keep at least 3 feet away from the base of the plant to avoid burning roots.

The blackberry bush, Rubus allegheniensis, is a type of bramble that grows in eastern and central parts of North America. It can reach heights of five to eight feet with a spread of five feet. The blackberry is native to the east, southern and southwest United States.

Native to the eastern and southern parts of the US, blackberries can be found in a variety of habitats including woods, fields, and roadsides. The two most common types of blackberries are the erect (tall) type, R. argutus, which goes by the name sawtooth or tall blackberry, and the trailing type, R. ursinus. Sawtooth grows 2-6 feet tall with a similar spread. It is found in the eastern US from Maine to Illinois and Texas to Florida. Trailing blackberry is less vigorous than sawtooth and typically grows 3-6 feet long with a 1-3 foot spread.

Blackberries are a type of berry that grow on shrubs in the Rubus genus. They are native to Iran and Armenia, but were introduced to the United States by botanist Luther Burbank in 1885. There are a variety of blackberry species, but the most commonly grown is the Rubus armeniacus. These berries are considered an invasive species in some parts of the country, but they are prized for their large and sweet berries.

R. ulmifolius is a species of blackberry that is native to North Africa and Western Europe. It grows as an erect shrub when it is immature, but then becomes semi-erect as it matures. The flowers are pink and measure a quarter to half an inch in size. R. ulmifolius berries typically come between July and September.

Pacific and California blackberry is a type of blackberry that is native to British Columbia, California, Idaho, Montana, Oregon, and Washington. It typically grows two to five feet tall and spreads up to six feet.

Blackberries have a long and varied history. They are thought to have been around for at least 2,500 years and there is evidence that they were eaten by the Haraldskær Woman shortly before her death in 490 BC. They are native to a variety of different regions, including North America, Europe, and Asia. They were discovered during an autopsy on a well preserved body in Denmark and it was found that the person had eaten millet and blackberries shortly before their death. Blackberries can be red or black, depending on the type of berry.

The blackberry is a fruit that is enjoyed for its sweet and sour taste as well as its soft texture. The leaves of the blackberry plant are also eaten, and they are considered a young spring vegetable. Additionally, Gerard’s plant was used to soothe eyes that were hanging out.

Blackberries are a highly perishable fruit that does not continue to ripen after harvest. The berries start out green and red, but they will turn black when they are fully ripe. They are best picked as soon as they’re ripe, but you can leave them on the bush for a few days if needed.

Blackberry plants are biennial, meaning that the root canes (the part of the plant that stores energy and grows new canes) produce fruit in their second year. To encourage maximal fruit production, you should tip-prune new canes to 3 feet in height. Remove old canes after they have fruited, and trim any winter-damaged canes.

how to propagate blackberry

Propagating blackberries is a relatively easy and straightforward process. You can propagate blackberries by taking cuttings from existing plants, planting seeds, or layering the plants. In late spring when temperatures are mild and rainfall is plenty, you can cut a 4-inch piece from the end of the stem. Newly started plants can be planted in fall or next spring.

There are a variety of pests and diseases that can affect blackberry plants. Prevention is the best strategy, and this can be done by purchasing plant stock from reputable nurseries, planting away from wild brambles, and using proper cultural practices. Insect pests that can be problematic include raspberry crown borers and stink bugs. Viral diseases can cause bright yellow splotches to appear on leaves.

How to Grow Blackberries in Pots & Containers

Blackberries are a delicious fruit that can be grown in many parts of the world. They are a perennial plant, meaning they come back year after year, and can be grown in pots or in the ground. When growing blackberries in pots, it is important to choose a compact cultivar like Baby Cakes that does not need pruning. You will also need a large container to hold soil: 5 gallons or more. Fences and trellis add support to the plant’s growth and also color your backyard. Harvest your blackberries in the summer

how to grow blackberries from seed?

The best way to grow blackberries from seed is to plant the seeds in a pot that has been filled with a mixture of peat moss and vermiculite. Blackberry plants will need to be watered daily, and they will need a lot of sunlight. The plants should be allowed to grow until the fruit is harvested.

when do blackberries bloom?

Blackberries bloom in the summer.

do blackberries grow on a tree?

Blackberries grow on a vine.

A blackberry bush is a type of plant that can grow up to 20 feet tall. It has dark green leaves with a purple tint and grows from the ground in clusters. Its flowers are purple and white and can be found in the early spring.

How long does it take to grow a blackberry?

It takes about 10 to 12 weeks for a blackberry plant to start producing berries.

Where should blackberry bushes be planted?

If you are looking for a place to plant blackberry bushes, the best place would be on your property. It is also important that this location is away from any other type of plants, as blackberry bushes produce berries that can stain nearby plants.

How long does it take for a blackberry to bear fruit?

It takes about 3 months for a blackberry to bear fruit.

What is the best month to plant blackberries?

The best month to plant blackberries is in the spring. The reason for this is that blackberry plants are perennial, so they will continue to grow and produce fruit throughout the year.