How to Grow and Care for Cleome Hassleriana (Spider Flower) Plant 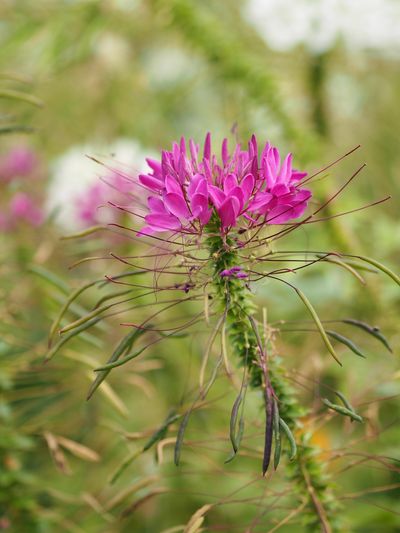 What Is Cleome Hassleriana or Spider Flower?

Cleome hassleriana, also known as spider flower (sometimes referred to incorrectly as C. hasslerana or by the synonym Cleome spinosa) is a flowering plant that is native to South America. It has many common names, including spider legs and grandfather’s whiskers. The pollen of this plant is long and thread-like, and the seedpods are elongated. It is a garden favorite that has been around since 1800. This flower is easy to grow and does not require a lot of care.

Cleome hassleriana, also known as spider flower, is an annual plant that grows a stout taproot. Its branches readily grow sideways, making it possible for the plant to become just as wide as it is tall. It typically has five to seven leaflets that are tapered at the base and are thornier than other varieties of cleome. Some people suggest the plants have a skunk-like scent, but this has not been confirmed. The lower leaves often fall and the end of the season.

How to Grow Cleomes or Spider Flowers

Cleomes can be grown most easily by planting seeds in the desired spot. Cleomes will thrive and produce the cleome “spider” blossom in full sun to part shade areas and do not require any special soil other than one that drains well.

Additionally, planting Cleomes from seed usually results in a more vigorous display of the tall, fragrant cleome spider flower. However, new varieties of the cleome plant have no fragrance and do not produce next year’s flowers as they are sterile. Conversely, older variety is useful as background plants for shorter, sun-loving flowers or stand-alone specimens when planting them in masses.

How to Grow Cleomes or Spider Flower From Seeds

Cleomes, also known as spider flowers, is a popular garden plant that can be grown from seed. They are easy to grow and care for, but there are a few things to keep in mind. Cleome plants need light to germinate, so it is best to sow the seeds in a sunny spot. The seeds will germinate over the next growing season. Thin newly emerging seedlings to allow 18 inches between plants. Allow cleome plants to self-seed for an ongoing supply of blooms.

When growing Cleomes or Spider Flowers, it is important to know that the plants encourage the most blossoms from each plant. In addition, the long pods that form can be removed to limit their self-seeding habit. Doing so will encourage more blooms on the plants.

How to Care for Cleome

Cleomes are a tall, focal point plant in the annual garden. They grow quickly from germination and don’t need to be staked. Hummingbirds, butterflies, and hummingbird moths are drawn to the flowers all summer long. Pests and diseases don’t affect this plant making it an easy choice for any gardener.

What are the Light conditions required for Cleome?

Cleome flowers thrive in full sun, and shade might cause them to grow too tall and collapse over. Blossoms will appear from early June until the first frost if you start with transplants. Depending on the climate, gardeners who grow cleome from seed usually get the first blossoms in mid-to-late June.

What are the Soil requirements?

Cleomes do best in average soil or rich garden loam and are intolerant to wet soils. They need well-drained, average soil with some organic matter for optimum growth

How Much Water is Needed For Cleome Plant?

Cleomes are drought-tolerant once planted, making them an ideal addition to the xeriscape landscape. Add a three-inch layer of organic mulch to their planting site to further reduce their water requirements.

What is the Ideal Temperature and Humidity required for Spider Flower Plants?

How Much Fertilizer is needed by Cleome Hassleriana?

When growing Cleome Hassleriana, you do not need to use fertilizer if your soil is good and you have mulch. Mulch will help keep the moisture in the soil and improve drainage.

What are the ideal growing conditions for Cleome Hassleriana?

Spider flowers (Cleome Hassleriana) are beautiful, flowering plants that grow well in conditions with lots of light and well-drained soil. They are easy to grow and can be found at most garden stores.

How do you propagate Cleome Hassleriana?

Cleome Hassleriana, more commonly known as spider flower easily grows from seed so propagation is not only unnecessary but also unfruitful.

What are the common pests and diseases of Cleome Hassleriana?

Cleomes are tough plants that can handle a lot, but they are not immune to pests and diseases. Mildew and rust might become a problem if the plants are overcrowded. Thin plants to avoid this issue.

One of the most important things to remember when growing Cleome Hassleriana is that plants need healthy soil in order to be as healthy as possible. If the soil is not good, then these plants will attract insects, which could shorten their life span.

How do you deadhead Cleome Hassleriana flowers?

Here are the steps to deadhead cleome flowers

Deadheading cleome flowers is an important part of care for the plant. By removing the faded blooms, you prevent diseases and pests from spreading to other parts of the plant.

How tall does Cleome Hassleriana grow?

Cleome Hassleriana is a flower that typically grows up to 5 feet tall. There are dwarf cultivars of Cleome that exist and can be as short as 6 inches.

What are some good companion plants for Cleome Hassleriana?

Cleome Hassleriana is a beautiful annual flower that can be grown in masses to create drifts of color. Some good companion plants for Cleome include shorter growing annuals and perennials, such as sedum and mounding zinnias.

In addition to the plants listed above, Tall Cleome also looks great when paired with yellow flowers. Some good examples include Rudbeckia, Sedum, Verbena, and Zinnias. Another great companion for Tall Cleome is ornamental grasses. They provide a nice contrast in height and help to fill in any spaces between the Cleomes.

Cleomes are a type of flower that comes in 180 different varieties. However, there are a few that are more popular among gardeners than others.

Cleomes (Spider Flowers) are a beautiful addition to any garden and can be grown in containers as well. When growing Cleomes in containers, it is important to choose a compact variety for the best results. You will also want to mix with mounding flower-like vincas and trailing flower-like petunias. Cleomes do best in large containers.

How to Get Cleomes to Bloom?

Cleomes are annual plants that are easy to grow and maintain. They can be grown from seed or purchased at a nursery. Deadheading will encourage growth and prevent seeding; while pruning is not necessary. Once established, they are drought-resistant and require little water.

What color are Cleome Hassleriana flowers?

The spider flower is a type of flowering plant that has delicate pink, rose, purple, white or bicolor flowers. The seedpod of the spider flower has a spidery shape, which is where it gets its common name.